Tibirke Bakker & Tisvilde. Landing in Copenhagen Airport at 6:30am, I go through the usual ritual of breathing in the sweet, fresh SPRING air of my native country, smiling at the beautiful, streamlined design objects flooding the terminal and buying a moist, freshly baked rye bread roll sprinkled with pumpkin seeds from Lagkagehuset before boarding a train to North Zealand. At Hillerød Station, the husband and 2-year-old daughter of one of my best friends from high school are waiting to pick me up and take me to their idyllic summerhouse in Tibirke Bakker, where my friend is waiting with freshly brewed coffee – and their son, who was born two months ago. We spend the whole day playing with the kids and walking through the beautiful beech forest to Tisvilde for a look at the beach and a bite to eat at a cosy little cafe. And we have plenty of time to talk… and to just be comfortably silent together. Our lives are so different: they are both lawyers at big firms in Copenhagen, own a house in the city and a summerhouse in the country and have two children. Looking beyond all of that, we luckily still have a lot in common, values, humour, interests, energy levels…

FLOWY 24 Hours in Copenhagen. Back in Copenhagen in the evening, my friend and I drink champagne at home, go for dinner at Mangia and then for cocktails at Lidkoeb with two mutual girlfriends while her husband looks after both kids. When we get back at around 2:30am, I sleep in their beautiful, comfortable guest room just as I’ve always done when visiting from either Singapore or London. What’s relatively new is that there’s a toddler watching cartoons in the sofa next to me when I wake up at 7am, haha. I love that. At 9am, I meet my friend, who moved back from Singapore in December, for a sunny run around Frederiksberg Have and Søndermarken followed by breakfast at vegan Acacia. So good to see her! And summery Copenhagen! It’s as hot as in Singapore here – and in Germany and London next week – but about 50% less humid, haha. Pretty perfect. Cherry trees and lilacs are blooming all over town and so many people are out and about, celebrating this dear, precious, long-waited season. Walking down Gl. Kongevej from the breakfast place, my friend and I bump into a friend I was going to visit later today… Like the friend from yesterday, this girl just gave birth two months ago,    and she’s got her son with her in his stroller. As such, we say goodbye to my running buddy and start strolling around Frederiksberg and Vesterbro before finding a spot, Mother (haha), in the Meatpacking District to have some lunch in the sun. A few hours later, I meet another friend for a walk along the Lakes, similarly with a stroller containing a 2-month-old baby boy. In both, or all three, cases it’s interesting to hear each of their personal and very honest accounts of what it’s like to become a mother – details about the birth itself, the feeling of unconditional love mixed with unprecedented worries and frustrations, thoughts about being on maternity leave and the idea of returning to their, in all three cases, very demanding careers in a year. Most of all, it’s just good to be able to spend time with them and their gorgeous little boys, laugh together, give each other multiple hugs, talk about our immediate surroundings; all of the things that we can’t do on a daily basis. Very heart-warming and meaningful, if brief, meetings! On my way to the airport at 4pm, I think about the past 2-3 weeks and smile: from spotting wild koalas and kangaroos in Australia one weekend to running into wild monkeys in Singapore the next weekend to meeting no less than 3 – pretty calm and domesticated! – newborn boys in Copenhagen the weekend after that… Wow! 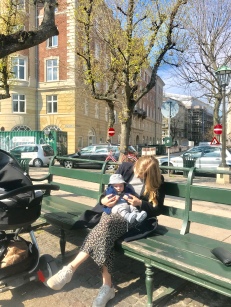 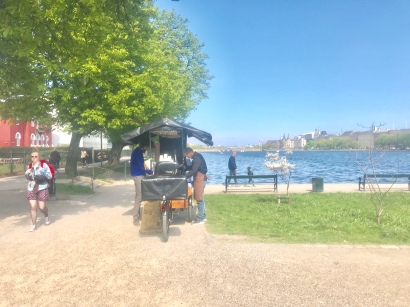 Erfurt. Fly to Frankfurt, where my parents pick me up in a happy, hug-filled reunion, and fall asleep on the backseat as we drive to the capital of Turinga, Erfurt, where their company is based.