Setting the scene: all of this week it’s around 27-30 degrees in London. The sky is blue. Lockdown is lifting: there’s a general sense of joyous relief in the lush, expansive, heaving city parks — and the streets that connect them. Though, mixed with frustration and anger — mainly over the systemic racism that’s being broadcast in America these days.

Every morning, Monday through Friday, I go running on the Heath with podcast friends in my ears. This one’s favourite is The Culture Call’s interview with Liana Finck, a New Yorker cartoonist, on being an introvert, social conventions, creativity, kindness, human connections, drawing emotions, making cartoons about negative emotions, nihilism, self-consciousness, shyness, being inspired by walking and driving around New York City, and much more good stuff.

Monday, around noon, I cycle down to Battersea Park via Hyde Park, Knightsbridge, South Ken, and Chelsea, all more or less void of activity, as stores, museums, and hospitality venues remain closed. It still makes me smile to paddle through these gorgeous neighbourhoods, though, and across the pastel-tower-adorned Albert Bridge. Meet two Danish friends, with whom I used to live in Spitalfields and Shoreditch, and the toddler of one of them for a long, lazy walk, chatting, laughing, circling around the ponds and across the lawns. Then cycle with one of them through all of Central London, mostly along the River, to Islington, where we wave goodbye outside her house and I continue on, up the still-busy, thankfully, Upper Street to Highbury Fields, for an ice coffee picnic with two colleagues, one English, one Indonesian. Then home via Holloway Road for a picnic dinner on the Heath with Sanoop. A few sunset walks in the hills and valleys behind our flat with him throughout the week. Friday, after a quick and cheerful happy hour on the rooftop terrace of our Canadian friend’s newly acquired flat atop Gail’s on the Hampstead High Street, I once again head to Highbury Fields on my bike, music in ears, to meet another friend, from Singapore, for rosé and food, this meal prepared by my friend — salads, bread, olives, artichokes. More of the lovely, deep, friendly, spontaneous, high-low chatter we’ve all been missing to have with our friends in 3D. On Saturday, Sanoop and I bring picnicky stuff to Primrose Hill, where we meet two of his friends from Hong Kong for yet another blanket-on-the-grass session, this one with the most splendid skyline view. On Sunday, we stroll along pretty, winding streets over to Queen’s Park, which is a first as previously we’ve only ever taken the overground here, with coffee from newly-opened — just for takeaway coffee and sourdough, of course — Milk Beach, one of my favourite Aussie haunts, and walk back the same way, checking out a neat Japanese organic supermarket, Natural Natural, in West Hampstead on the way. Later, I cycle, laden with sourdough and strawberries, to the glorious white terraced streets of Angel, where I meet a friend for a walk along the canal to Broadway Market and the final picnic of the week, in heaving London Fields.

A note on the cycling back and forth across London. More people than ever are cycling, on their own bikes (bike shops are in the ‘essential’ category) or on Barclays and Jump two-wheelers. Lots of bike lanes have been carved out along major thoroughfares of London to make cycling safer. There are fewer cars and buses to take into account as you navigate through the streets on your iron horse. One can’t help but wonder whether these tendencies are going to continue post-covid, or whether it will be the opposite … will car sales surge as people will be wanting their own private space to be transported in? So many people, and, in some ways, a healthier environment, depend on public transport, which depends on rider numbers … will authorities be able to ensure the level of hygiene that will be required by people for them to want to crowd together on a train … or, well, a virus vaccine … all these questions! Anyway, to me, most of the time, cycling is perfect escapism. One of my happiest ideas of happiness is cycling with friends, or alone on the way to meet friends, or home alone after having seen friends in the city parks, with music in my ears, through the city … it feels so exhilarating, freeing, fantastic, and as if my relationship with and knowledge of London is growing with every spin of my bicycle wheels.

Favourite moment on Tuesday is when the Heath’s swan family crosses the path from their sleepy time pond to their lounging pond, all in a row, mama and papa leading the way, ensuring that the coast is clear, jumping in first. I noticed them in the day-time pond already two days after hatching, but this is the first time I see them actually crossing, and now, observing the cygnets slowly progressing towards the water, at 7pm as I’m just getting started on my morning urn, and the little ones are all curled up and shivering while picking up the courage for their one-by-one, rather deep and uncomfortable-looking headfirst plunges into the water, I wonder how they even did it when they were younger and so much smaller? Were they perhaps all sitting on their mama’s back or something?? Either way, my heart skips a beat. Those big butts, tiny wings, brave hops! 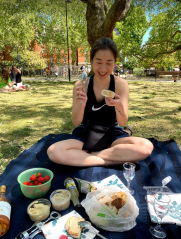 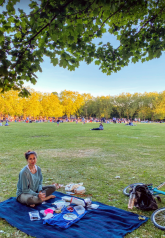 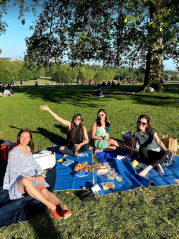 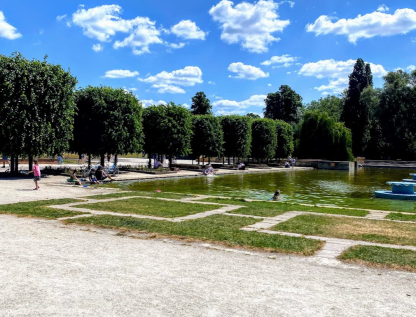 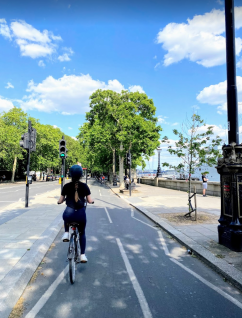 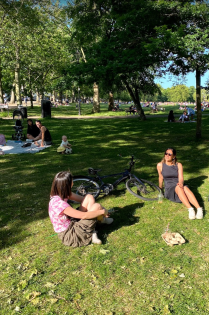 Well, and the streets are part of city life as well, of course; this week (as most, for us), the leafy back streets of North West London. I am thrilled to live in a city where every day you can go for a walk in a different neighbourhood. Guess you could argue that you can see something new or different every day in any city, or smaller cluster of buildings, or rural part of the world; it’s all about the eyes of the beholder, perspective, paying attention to detail, and of course gradual and/or immediate changes happening. And so many cities are even bigger than London, with a much denser sensory overloads. But, London is easy in this respect … it’s accessible and relatively safe and relatively interesting to get lost in. On Monday we do this in a neighbourhood of Hampstead we’ve never been in before, checking out the charming architecture, beaming at the exotic-looking flowers, taking in this white-and-blue property that apparently was used as inspiration for the house that the eccentric admiral lives in in Mary Poppins. On Sunday, there’s our walk through Belsize Park, Kensal Rise, and Kilburn to Queen’s Park. Leafy avenues of stately bay-windowed brick houses intercepted by simplistic art deco and edgier steel-and-glass buildings. Colourful mews housing creative studios. And colourful council estates. And then there’s this door, below, which we spot in Hampstead Village. Don’t even want to know why, or what purpose it serves; it just makes me smile — and if that’s the sole purpose, then thank you! I love you, London, and most of all I love when you adorn your shiny, colourful front doors with half drawn checkered curtains. Almost expecting to see a crumpet or cup of milky tea being handed out from behind the curtain on a tray. 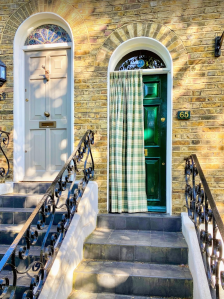 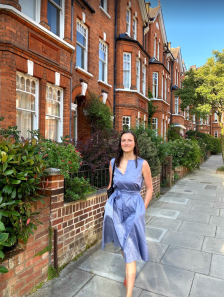 Peaceful cuisine — so soothing! Beautiful plant-based recipes made carefully, with lots of love and tranquility.

Yoga with Adriene — 20 min flow, as often as possible.

Monocle, June 2020 — very different issue this month; I love it!

This week’s dynamic intuitive life drawing theme is patience, with the facilitator on zoom quoting Ram Dass’s musings on presence — there’s nowhere else I need to be. I have arrived. 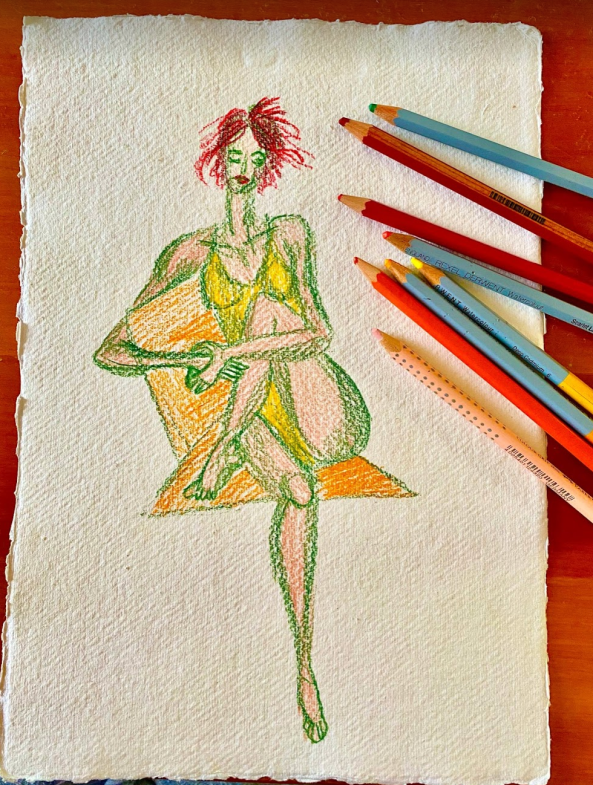 Up-close, front-row view of the trembling limbs and intense facial expressions — one silver living of watching a ballet online, curled up on the sofa with Sanoop on Saturday night: The Royal Opera House / The Royal Ballet put the rich and poignant, joyous and tragic The Cellist on YouTube, available for the next few weeks. While nothing beats the magic of the offline real deal, dressing up, the beauty of the place, whether it’s the main stage in Covent Garden or small independent stages, the interval drinks, the excited buzz of the crowd, it is a pretty spectacular and immersive ballet experience still: a lyrical memoir of the momentous life of Jacqueline du Pré, from her discovery of the cello through her celebrity as one of the most extraordinary players globally to her struggle with MS. A pretty intense mix — the elegance and fragility of ballet, the passionate and intuitive movements of a cellist, and the destructive power of MS. Adjectives that fully apply to the love story depicted in the piece as well, between the musician and her composer. All dreamed up in delicious contemporary colours and vibes. We’ll watch more shows online — making the most of being able to take in all the tiniest details.

How NYC Ballet’s Lauren Lovette Gets It Done