Weekend: driving down a winding coastal road with my love, breathing in the smell of eucalyptus from the silver-green branches waving softly in the wind around and above our shiny grey car, smiling at the rugged coast line, white beaches and deep blue sea below us, pointing out rainbows shining towards the horizon, stopping wherever we feel like it – to say hi to wild kangaroos and koalas, drink local wine, hang out with local friends and hug and kiss each other, haha.

Going through the week being happy for no reason (as always), but with a pinch of excitement added: we’re off to Australia just after midnight on Friday. S is going there on business – I’m joining and working from our office in Sydney. Everything is relative: people around us travel all the time, with or without work; this is our lives and we’re living it exactly as we want; it’s not a big deal…. and reversely; imagine how I’d have reacted if someone had told me, just a few years ago, that I’d be going to AUSTRALIA, just like that, without a huge amount of planning, three times within one year… it’s a huge deal. Haha. Whichever way I look at it – I allow myself to feel very lucky. Our two previous trips, last spring (or, autumn in an Australian sense, here and here) and autumn (Australian spring, here and here) were wonderful – I fell in love with where we were and feel hungry for more – more of the same as well as new experiences in those places. This time, S will be there for a few weeks, whereas I will be there for just 9 days. We’ve hired cars in Melbourne and Byron for the weekends. Booked four different Airbnbs, in Apollo Bay, Fitzroy North, Bondi and Byron respectively. Wanna rise with the sun and have fun every night. By our own definition, we’re making the most of the trip 🙂

Before that though, I’m enjoying being in Singapore and reconnecting with people I know here after the Christmas break: working with my team at our cosy office in the CBD, breakfasting with a friend at Tiong Bahru Bakery, getting an update on her newest book project, lunching with a friend at Loloku (best poke bowl ever), drinking coffee with a friend at Ronin (who gives me one of her beautiful designs to bring on the trip), meeting S and a handful of our mutual friends for happy hour oysters & champagne at Black Swan (who spent the Holidays in Yunnan, Tibet, Sydney, New Zealand, India, Beirut and Saigon respectively … SO many travel stories to share, haha). Home-cooked breakfasts and dinners with S, mostly to an incessant, rhythmical monsoon soundtrack. Sharing one glass of wine at PS while leaving through Frankie and Dwell. Packing up our stuff and heading to the airport late on Friday night… 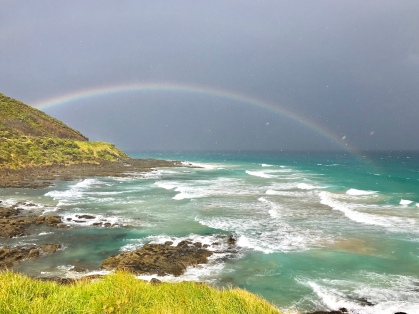 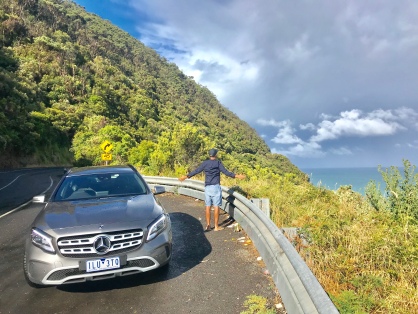 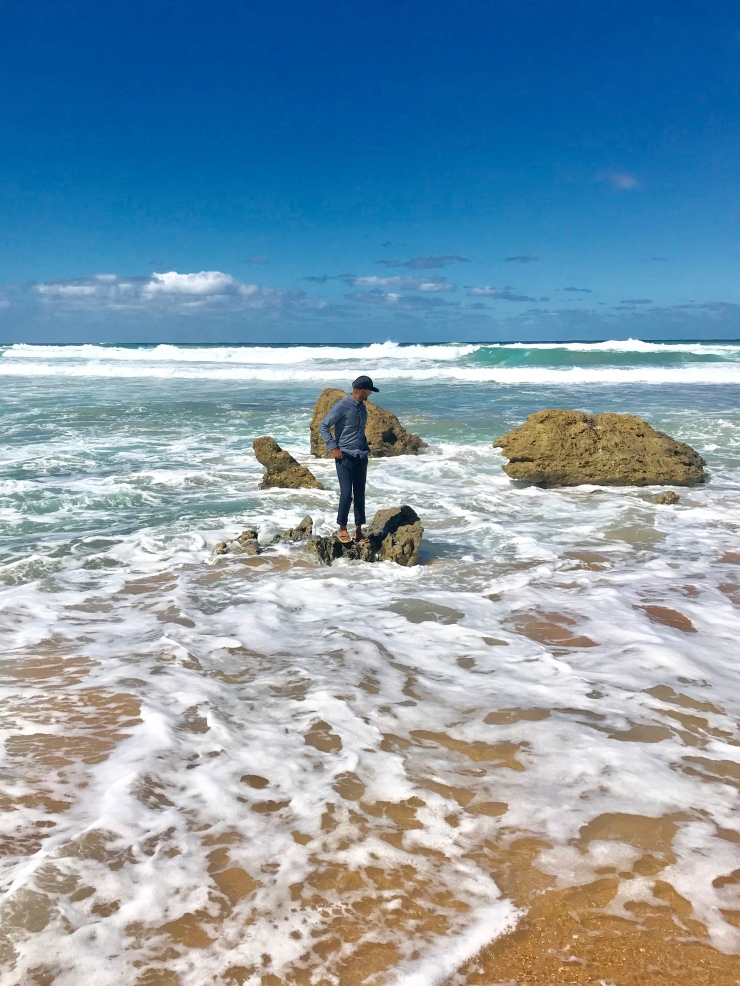 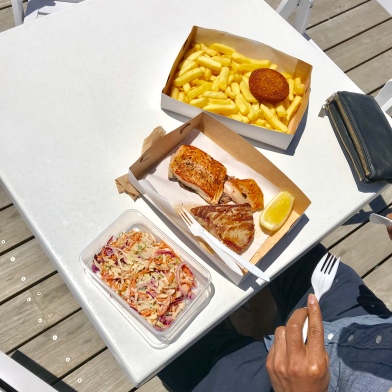 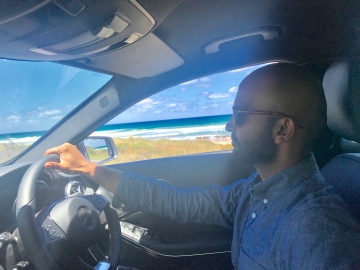 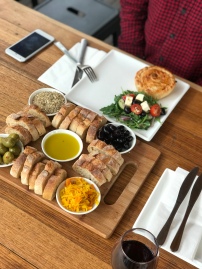 Listed on the Australian National Heritage List, the spectacular Great Ocean Road (check out this and this) is a 243 kilometres long road alongside the windswept Victoria coastline. It was created by WW1 veterans between 1919 and 1932, and, dedicated to the fallen soldiers, is the world’s longest (?!) war memorial – winding its way along the Southern Ocean through varying terrain and several prominent landmarks, such as the famous and famously eroding limestone formations, the 12 Apostles, of which 7 are still standing. Lots of amazing things to see along the way, and we will do what we can manage this weekend.

Land in Melbourne at 11am, pick up our car, head south towards the coast, and before starting our tour at Torquay (‘taw key’), we pop by Belbrae Estate for freshly baked bread with hummus, raw and pickled veggies and dukkah (about which Australians turn out to be crazy – they have it everywhere, usually with Australian macadamias mixed in!) and a glass of wine, the ‘first taste of the Great Ocean Road.’ The winery has great marketing – and great everything else. Our table is a wooden barrel. Every bite and sip is full of rich flavour and deep colour. Dogs and kids are strolling around among vines and wine-drinking adults. Except for those vines, all greenery at the estate, trees and lawns, seem un-manicured, wild. It’s overcast and windy. As cliched as it sounds, I feel so wonderfully alive in the fresh climate. I didn’t sleep at all on the overnight flight, and my eyes are small and puffy, but as soon as we’ve finished our delicious treats and padded the cute dogs, I feel ready to hit the road and soak in the impressions along it. Fun fact: in recent years, Australia has been shipping vine cuttings to France after their vines were decimated through disease. So French wine is really Australian!

Anglesea Golf Course. Drive past and stop in front of the course to smile at the big flock of kangaroos hanging out on the soft green expanse, nibbling at the grass and jumping around. Haha! The first time I’m seeing kangaroos in the wild – and then there are so many of them… on a golf course!

Visit the surfers’ paradise, Bells Beach. We park above the cliffs leading down to the beautiful beach, and start climbing down towards it just as it starts drizzling and, after we’ve taken a few hundred brave steps onwards, pouring down. We run back up to the car, utterly soaked. If there were any remnants of sleep left in our bodies and brains, they’ve been washed out, haha!

Split Point Lighthouse at Aireys Inlet was constructed in 1891, 70 metres above sea level; locally known as The White Queen. Willows Tea House next door to the lighthouse looks cute – but was closed when we came up there; next time, maybe, hehe. The coastline is known as the ‘shipwreck coast.’ If you ever drive along here, watch out for the signs indicating ‘historical marker,’ indicating two sunken ships. As some of the people trying to salvage the cargo lost their lives, the marker was made to resemble a grave. At low tide, you see the ship’s anchor sticking out of the water…

Wye River. We stop here for a glass of wine on the wooden terrace of the lively bar just above the beach, where a family is playing cricket in the sand and kids are jumping around in the shallow waves.

Kenneth River. Driving up a forest path, we spot a koala in a tree. We stop the car and climb out, ever so quietly, and look up just as the fluffy animal jumps lazily from one branch to another and sinks down into the V between the branches to take a nap – after he’s stared down at us for a while, curiously or to make sure we’re staying put. We sure are.

Airbnb bliss at a modern-coastal-styled house (the Apollo Bay name for a Queenslander), whose owners, over the big, old-fashioned breakfast spread they prepare for us on Sunday morning, enthusiastically tell us about the beech forests, sequoia trees, rainforest walks, waterfalls, splendid lighthouses and vantage points and various other wonders we MUST TAKE OUR TIME TO EXPERIENCE along the GOR.

The cavalcade of tour buses leaves Apollo Bay at 1-2pm to go to the 12 Apostles. We get there by 11am to beat the crowd – successfully. Walking around right there, on the beach and atop the cliffs, is just as magical an experience as the pictures indicate.

Freshly grilled salmon and tuna and fish cakes at Apollo Bay’s Harbour Fish Shop on our way back along the coast. We munch on the delicacies outside in the sun, sitting at a plastic table right above the neat little marina. The view, the surroundings, everything just feels so fresh, clean and calm, including the big group of Hells Angels motorcyclists stopping here for lunch as well, haha.

Mid-afternoon, we meet a couple of friends, who hosted us at their beautiful home in Mornington Peninsula back in April, for a glass of sparkling wine, followed by another one, and then a third one, on the large, sun-drenched terrace of the surf club in Lorne. Their summerhouse, and their respective parents’ summerhouses, are just a few hundred metres above the lively beach-facing club. Except for a few summers of travelling around the world, our friends have spent all of their summers in this quaint seaside village – and now their three kids are playing with the kids of their friends on the beach. Such a wholesome and idyllic notion… which is only reinforced when her sweet, cheerful parents join us for yet another glass (S, as the only one, has stopped drinking at this point, as we still have to make it back to the city before it gets too late to hand over the car). We chose this meeting over all of the recommendations from the Airbnb hosts; and I am happy we did. They are such good people, and getting an insight into their carefree lives here on the beautiful coast south of Melbourne is as valuable to us as any waterfall sighting.

We end the weekend at a beautiful studio flat in Fitzroy North (see the photos here). It’s located in a narrow, cosy alleyway and features light and hip decor – everything from the minimalist furniture and trendy ceramics, white walls, skylights, small leafy patio and mezzanine bedroom to the fresh flowers and indie magazines arranged on tables, mini champagne bottles in the fridge and Pukka tea bags on the shelves above the neat little kitchen is just… impeccable… dreamy. After gulping down the champagne in the elegant grey sofa and before falling asleep in the fluffiest of bedding soaring above the pretty room, we head out for an evening walk in the quaint neighbourhood full of terraced Victorian houses and neatly manicured gardens to have dinner at 400 Gradi – maybe the best (dairy- and gluten-free) pizza I’ve ever had. Dessert is lemon sorbet to go from a parlour next door – scooped up by a Mexican girl who grew up in Malmö, studies landscaping architecture in Scotland and now is doing a semestre abroad here in Melbourne. Her accent contains traces of four different languages, different intonations, different choices of word… fascinating. Walking home, on a whim, we purchase tickets to go watch Caroline Wozniacki play her first match at this year’s Australian Open!! Tonight we’re still two weeks away from her regaining the spot as the number one female tennis player in the world; from experiencing the, by some sports commentators referred to as, greatest achievement by a Danish athlete ever – a grand slam win. I’m yet to discover that I love watching tennis. For now, all we reckon is that seeing as we are here, we might as well go watch this tall, blonde Dane who’s playing in the tournament – S has to check out the grounds anyway for work purposes.